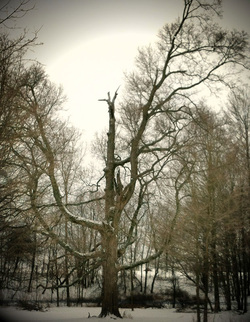 Lots of history surrounds our operation. In the early 1900s several thousand people would meet for a festival called the Waterford Picnic amidst the maple trees in our sugargrove. Folks would travel from several states to attend the week-long event. 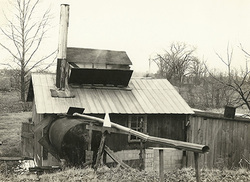 Sugarhouse in the early 1960s
Bonhomie Acres' current sugarhouse was built in 1948 by William and Kate Brown. It was at least the third sugar house to be built on the farm. Bill and Kate started out with 600 taps using horses to pull the sap gathering wagons and boiled on a wood fired evaporator. Bill started a woodlot improvement project on 40 acres of woodland. Growing maple trees is a slow process but production had increased to 1300 taps by the mid 1980’s. In 1989 the first tubing system was installed with 500 taps in a woods leased from a neighbor. The tubing system proved to be a much more efficient method of sap collection than the buckets. Today Bonhomie Acres produces syrup from 4500 trees located on 120 acres almost entirely on tubing systems.

We have had many visitors from across the USA and from many countries. Our syrup is popular as an “Ohio gift” and has traveled to all corners of the world. We have hosted the Heart of Ohio Tour, Maple Madness Tour, Ohio Maple Producer’s Association, the Ohio Department of Agriculture, OSU Extension, School Groups, Scouts, and Church Youth Groups.

In 2008 William Brown was inducted into The North American Maple Producers Hall of Fame. William was the only producer from Ohio to ever receive that distinction.